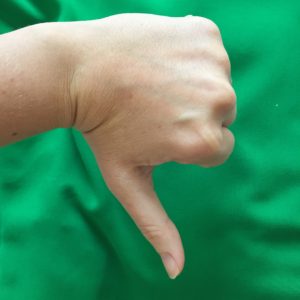 Well it had to happen. Sometimes you have an idea in your head and it’s wonderful and amazing and however hard you try it just doesn’t happen. This is that dress.

Maybe I’m being over the top. Or maybe I’m not. You decide….

A hellish nightmare. Or, if you want to be precise, theoretically a wrap dress with a scooped neck and capped sleeves.

The most gorgeous, soft green viscose bought from somewhere in the depths of ebay. 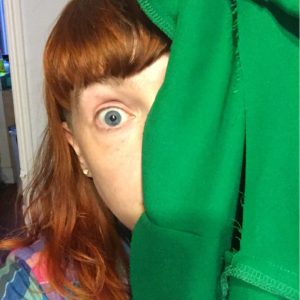 Drowning in viscose. Might have gone mad by this point…

The Colette Crepe wrap dress, something I’ve had my eye on for ages and that I tested out with the fastest wearable toile ever.

I liked the colour. And that’s it.

Oh god. Where to begin? There’s a lot of things that were less than fun, so, for ease for everyone I’ll use that old favourite, a bullet point list: 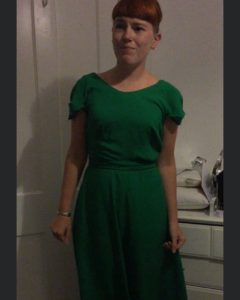 I think my face says it all

I was really gutted with this. It’s something I’d wanted to make for ages, I’d planned to make it for a friend’s wedding, and when it went to pieces, I lost all confidence in it. As much as some people might look at it and think “oh it’s not that bad”, the point was that it felt bad, and I think we can all agree that a fancy dress is not one that you’re meant to feel bad in.

I’ve got some ideas of ways I can salvage it (cut those sleeves off for a start…) which I’d like to do, especially as the fabric is so lovely. But right now, the idea makes me want to cry, so I think I’ll just leave it in my fabric box until I can face it (read: some point in the far future).

THAT SAID: this was, despite the frustration, a good experience as it was a reminder that it doesn’t always go right and that doesn’t matter. I ended up wearing the Nani Iro dress of dreams to the wedding and felt absolutely great in it (and had some lovely compliments to boot). Plus, the next thing I made was about a million times better and made up for all the hurt. Result.

So, was I being over dramatic?

One thought on “The green dress of doom….”