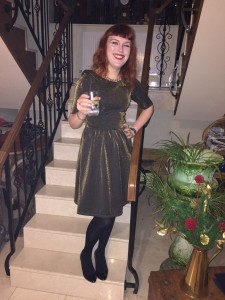 It’s taken a while. but finally, with this post, I’m up to date on my pre-Christmas sewing, and it will come as no surprise that when I decided I wanted to sew a dress for New Year’s Eve I decided to combine two of my favourite things; shiny things and swooshy dresses!

What is it?
A Moneta jersey dress with three quarter sleeves and the peter pan collar hack

Is it blue?
No

Where’s the fabric from?
One of the shops in Walthamstow. The man who sold it to me was a fabulous geezer and as I said in the Astoria post, everything in there was £5 a metre or less!

As ever with Moneta, it came together quickly and easily, and it was good to try out a collar hack. I was still pleased with the gold topstitching I trialled on the Astoria, but, most importantly I got to use my overlocker! 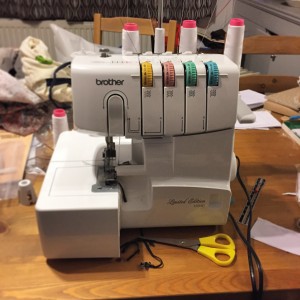 Having to wait so long to use the overlocker. Seriously, it arrived here mid December, but due to Christmas rules, I wasn’t allowed to get it out of the box until I came back from my parents’ house. Pretty testing times. I mean, look how excited I was when it arrived: 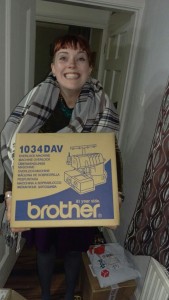 I have a feeling that yes, this won’t be the last time a Moneta appears on this blog!

One final photo for you all; I got the boy to take a couple to try and get the dress in its best light, but my absolute favourite photo (bar the one of the two of us being silly) was the out take! 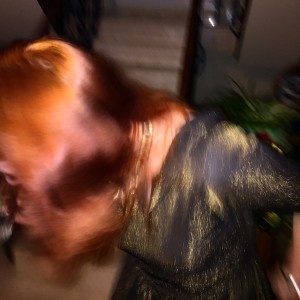 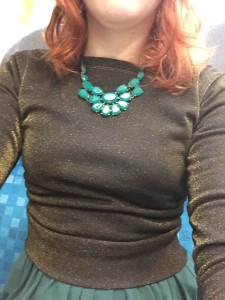 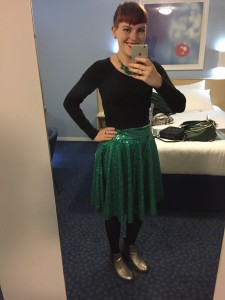 Remember that time I went to London and got enabled into buying several metres of sequin fabric?

I knew at the time that I wanted to make it into a super sparkly skirt for my work Christmas do, and so it was that one evening in November, having used the super handy By Hand London circle skirt calculator, I found myself on my hands and knees in the dining room, preparing for the flood of sequin babies that even now we’re sweeping up… 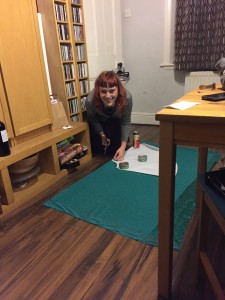 A teal green sequin circle skirt, which Elle has christened a mermaid skirt (and who am I to argue?)

No, although pretty close on the colour wheel 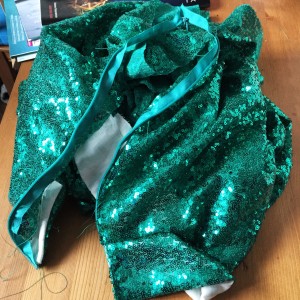 One of the first bricks and mortar shops you come to in Walthamstow Market, although I can’t remember what it’s called…

I read Lauren’s incredibly helpful blog about sewing with sequins. And promptly forgot everything I read, apart from the bit about using a teeny needle. So whilst I didn’t suffer a broken needle at any point, I did have to endure a LOT of snapping threads. Cue frustrated face.

I would make a circle skirt again; I like that it’s swooshy and big without being quite so gathered. I would sew with sequins again too, as now I’ve done it once, it can only get better. Would I make a sequin circle skirt though? I’m not so sure (but I don’t think that’s a bad thing)