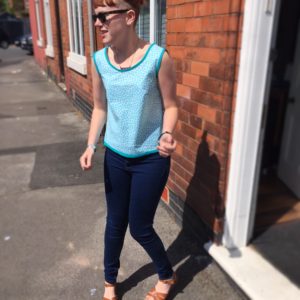 One of the very first patterns that I found when I started sewing was the Colette Sorbetto. It’s a free to download top and I thought “well that’ll come in handy”.

Two years later, I was looking for something quick and easy to sew up for a weekend during Me Made May. Turns out, the Sorbetto was very handy!

The fabric is the remnants of the super lovely elephant fabric that the boy bought me back when I started sewing and some bias binding I had that by complete fluke was exactly the right shade of blue.

The Sorbetto, but hacked to remove the central pleat. I found a tutorial for this on the Colette blog which was really straightforward

It was so quick and easy to sew and a great way to use up a bit of fabric that I really didn’t want to get rid of.

Ummm…… honestly? Pretty much nothing.

Yup, I’ve got a couple of leftovers that would make great tops and, as if they knew, Colette have just run a week of different hacks on the pattern. They’ve got a knit one, a dress one (although I probably will keep the neckline on the original) and a modernised one. I’m going to end up with one for every day of the week at this rate!