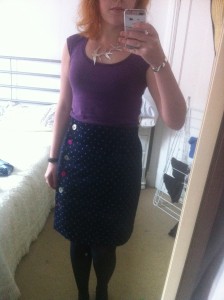 An asymmetrical denim skirt with side button opening

The Arielle skirt by Tilly & the Buttons

The denim was from Guthrie & Ghani in Birmingham

I discovered I can be pretty resourceful if I need to; at the time I bought it, they didn’t think they’d get the denim back in stock so I had slightly less than I needed for the skirt. I altered the pattern to make it shorter (but not mini skirt length) and used different fabric for the facing. I liked how quickly it came together

The top buttonhole. I’d not done buttonholes before and it took about six attempts to get the top one to work as there more than anywhere else the amount of fabric the buttonholer had to deal with meant it got pretty thick. I very nearly gave up completely. Also, the spots were white when I bought the fabric but went blue when I prewashed… And haven’t gone back yet….

Yes, not least because it’s a fantastic skirt for cycling in. I quiet like the idea of making one in red. I think I’ll make it full length this time (i.e. buy enough fabric!) and also tackle lining it.