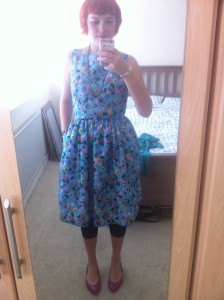 The very first thing I made.

Actually making a dress. This was the first thing I felt brave enough to tackle and the feeling of success once I’d finally done it was amazing. The fact that on the first day I wore it out someone asked where it was from and then offered to pay me to make them one (I politely declined!) only increased the feeling and made me want to sew even more.

I didn’t make a toile (and still haven’t despite making a second version….) so had to make quite a lot of adjustments to it once it was made up. I also found the instructions pretty confusing as a first timer

Yes and I did (see the Elephant dress)