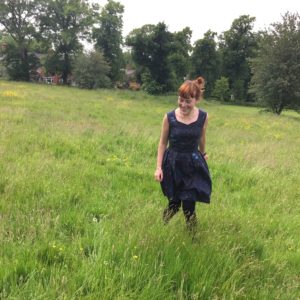 It’s one of life’s great questions: why have one space dress when you can have two?

As a result of internet ordering and some rather economically cutting when I made the first space dress (thank you a pattern that didn’t need matching!) I had quite a bit more fabric left than I expected. Enough, in fact, to make another Mortmain. It would have been rude not to!

A shift dress with a pleated skirt. I altered the neckline to make it a sweetheart neckline rather than the standard round neck.

As blue as space. 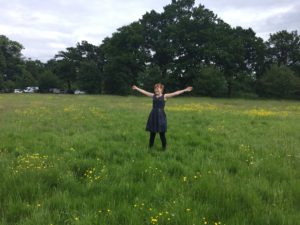 Playing Sound of Music in our local park…

The constellation fabric from Fabworks Mill, as before.

It started out as the trusty Mortmain by Gather Patterns, before I cut and altered the neck to give it a sweetheart.

It was good fun to try my hand at some (very light) pattern drafting by altering the neckline. I also discovered a total cheat’s approach for finishing the neckline when you can’t / don’t want to deal with altering a facing piece. I simply overlocked it at 5/8″, turned the overlocked edge to the inside and stitched in place. Piece of cake. 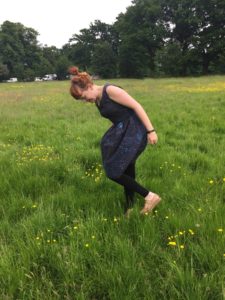 The nervousness about whether the alteration would work was the main one. That and the fabric creases a bit more than I’d like, so pressing the pleats in place was a bit of a pain.

Probably not with the sweetheart (although maybe I will) but I will probably make the Mortmain again, not only because it’s my go to cotton dress, but also because there’s some super special fabric in my stash that, although now used, at this point in time was waiting to be sewn… 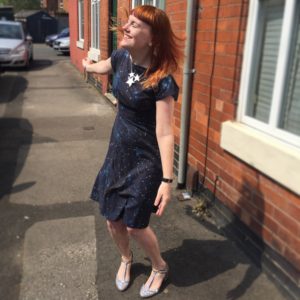 When I made the floral Anna dress, it was a toile for some rather special fabric; this fabric. Space fabric.

Everyone loves space, because it’s amazing, and this dress makes it even more amazing.

Not just any blue, space blue

The fabric is a lightweight cotton that I got from Fabworks Mill (although it’s sadly now out of stock). I was pretty excited to get the fabric, but that got even more exciting when I discovered from Elle that the fabric was originally from Paul Smith! And then I googled how much a Paul Smith shirt cost, which was pretty terrifying. Fabric find of the year!

The By Hand London Anna dress in the midi length version

Getting to sew with space fabric. Also, making something for a special occasion always makes it seem more exciting.

As before, the sheer volume of seams that need overlocking with a six panel skirt is just boring.

Honestly? Probably not. I might consider making the maxi length dress, but after a couple of wears of this and the other Anna dress, I’m not sure if I like the bodice fit enough to make it again. I do still like it lots though!