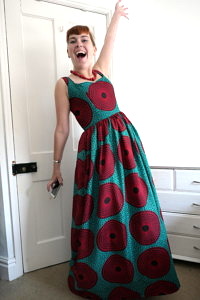 I’ve never really been much of one for maxi dresses, although I’ve often admired them from afar. This summer, I wanted to change that and actually make one for a change, not least because, for reasons I’m not entirely sure of, maxi dresses are inexplicably linked to summer in my head. I had visions of wearing it to summer parties, of swanning around in it whilst wearing lovely sandals, and generally being a vision of summer.

In the end, due to the weird absence of a summer we’ve had in the UK this year, this dress has only been worn once (to a barbecue where it then unsurprisingly proceeded to pee it down, which led to some rather hasty alterations). However, next summer? Next summer I’ll be ready…. 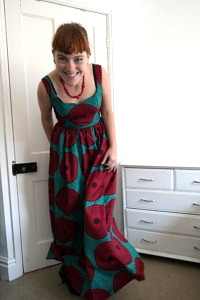 A full length maxi dress with a sweetheart neckline

The fabric is an imitation African wax print (it’s way too polyester-y to be actual…) that I got from a stall in Dalston back at Christmas time. 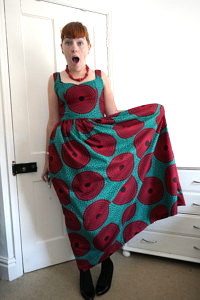 Would you look at the skirt on this?

I used the By Hand London Kim dress for the bodice and added a full length gathered maxi skirt. 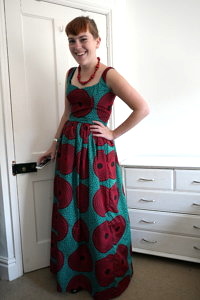 I did a further alteration to the Kim bodice this time, whereby I moved the straps in at the shoulders (I’d found that they previously slipped off). It turns out that I made them ever so slightly too long – something I corrected when I made my birthday dress – but the conquering of the alteration was still pretty confidence building.

Pattern placement was a bit of a bum with this dress, not because the pattern isn’t clear (I mean, look at it!) but because it was printed off centre so was effectively on a bit of a bias. There’s also a flaw running through some of the print, but you wouldn’t know if unless you looked for it (and I’m not going to tell you where it is). 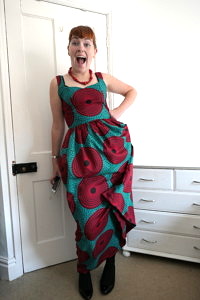 Making a maxi dress was a bit of a new one for me, I generally stick to somewhere around the knees (excluding the ball dress, but, y’know, balls). As lengths go, I liked it more than I expected, but it’s definitely not something that’ll be creeping into my every day wardrobe. As for the bodice, this was – effectively – a final toile before making the birthday dress, and given how well that turned out, I think it’s fair to say I’ll be making the Kim again!

ps. The awful weather at the end of the evening? This is how  I got around it…. Classy…. 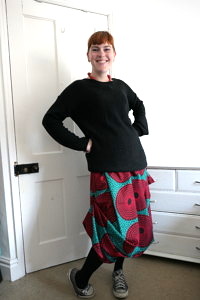 One thought on “Circling round and round”