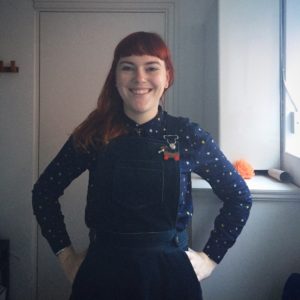 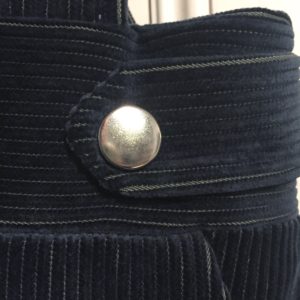 According to the internet, it’s the day an Australian journalist, a Chinese director and a Welsh golfer died. It’s also the day that I posted this picture on Twitter (yes, Twitter. These were pre-Instagram days as far as I was concerned) 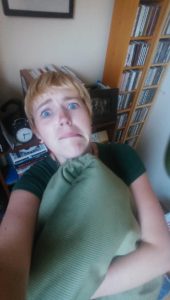 (Yes, I was blonde then)

I’d just bought (more than) enough fabric to cover the sofa in my flat.

I finally did something about it.

A sofa cover; more accurately, a cover for a base, and two covers for back cushions. 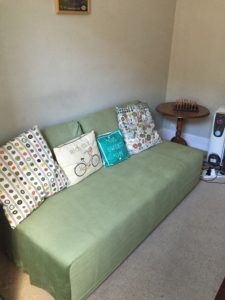 So proud of this!

No, it’s green. This was a conscious decision for a flat two homes ago, but remarkably still works in the place we live in now.

The fabric is green corduroy that I bought from Fancy Silk Store. I’m fairly certain that they couldn’t believe I wanted to buy as much as I did (if memory serves, I predicted I’d need about 7 metres. I didn’t).

It’s a DIY / self-draft, based on a net for the base and two sausage shapes with pillow case closures for the back cushion. 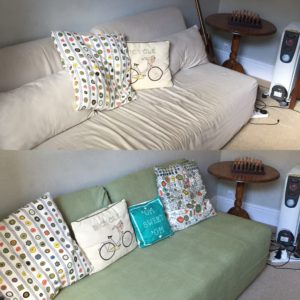 Before and after. The difference is amazing.

It has made such a difference to the living room to put a new cover on the sofa, I really underestimated the impact it would have. I’m also amazed at both how quickly it came together (4 hours from measuring out pieces to being finished) and at how little fabric I actually needed (I reckon about 4m in total).

Well, these things, but mainly the fact that the boy will stop nagging me to make the sofa cover now)

That it took me so long to get around to doing something so simple. I could have made one a year and had three different sofa covers in between times if I’d just pulled my finger out.

Now I know how easy it is, I think I would, although it’ll be at least a year or two before I do as these things are designed to be long lasting.

As an additional plus, all those extra metres of fabric mean that I might finally get around to making the dungaree dress I’ve been dreaming of all autumn (although, I hasten to add, I’m planning to dye it first so that I don’t disappear when I sit down!)

*I’m so sorry for how bad this pun is. It was literally the best I could come up with. If I had a school report for pun writing, right now it would say “must try harder”. Except the teacher would have come up with a punnier way to express that.