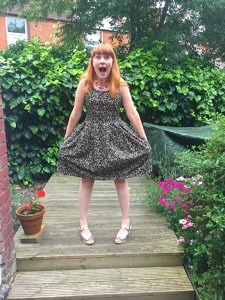 I wasn’t disappointed, and the finished dress is one that works really well with the fabric I used. It also came together incredibly quickly; having started to cut out the fabric at 11am on a Saturday I was ready to wear it out for drinks with friends that evening, which is always the sign of a good pattern (at least it is in my eyes!) 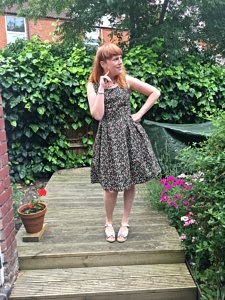 A sleeveless dress with a scooped neck and pleated skirt.

The main body of the fabric was kindly given to me by White Tree fabrics. The lining material was from the £1 man on the rag market. 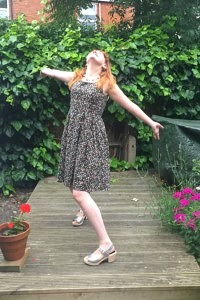 The Simple Sew Grace dress in version B.

I made the pattern straight out of the packet (I know, but I was feeling impatient and needed my sewjo back) and it was a pretty good fit. The pleating of the skirt was nice and neat, and the little details – like using the outer fabric as lining on the waistband – make for a pleasing finish. 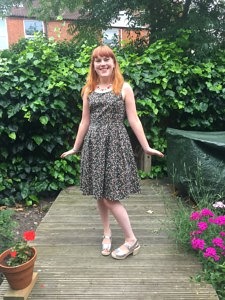 I made a big old error. I had about the same amount of fabric as I needed, and wanted to cut the tea-length version of the skirt. I did not check that I actually had the right amount of fabric to do this, I just went ahead and cut the front of the skirt at the longer length. And then I did not have enough fabric left for the back pieces. Which was pretty effing stupid.

Thankfully, I had enough fabric for pieces that were still longer than the short version, and I could improvise with a length that actually worked out quite nicely.

The only other thing that was bad, but not in a really bad way, was that the back bodice piece was designed to go with both neckline versions, but really only fitted against the wider version. I had to do a bit of fixing to make it narrow enough for this version, but it wasn’t anything particularly arduous. 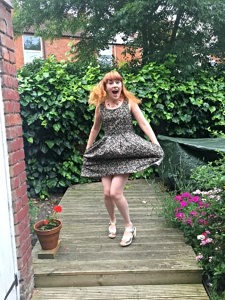 I think I would. I’ve worn the dress a couple of times since I made it, and it’s been a general success. I need to do something about the straps just above the boob as there’s a tiny bit of excess fabric which I’d prefer to get rid of. I think it would need a pleat or maybe a SBA? I’ll be doing some research to figure it out at any rate!

Although the fabric and the sewing pattern were very kindly given to me, I received no other forms of payment for this post and all the views expressed are my own.

2 thoughts on “Like blossom in spring but captured for summer”